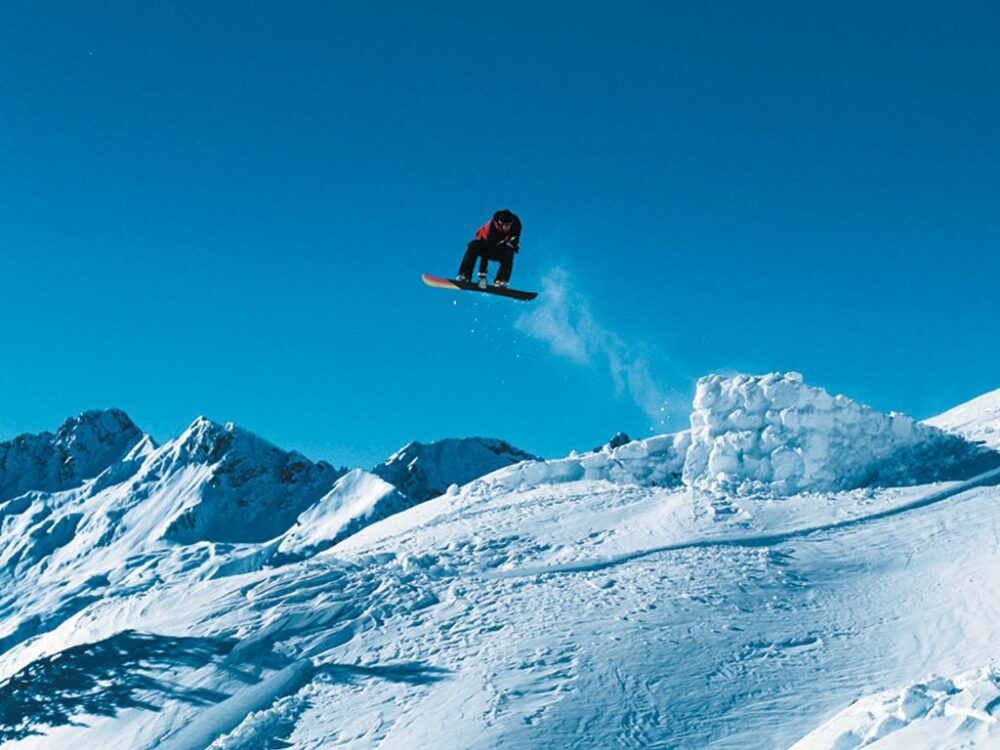 5 IDEAS TO CELEBRATE VALENTINE’S DURING LOCKDOWN

After spending three days in the capital city of Athens and having taken in all the amazing sights, my friend Alex and I decided to head north and explore other parts of Greece.

Our final destination was Thessaloniki but I guess we’ll have to do that one other time.

Well, after driving 360 km, we arrived in Volos and stopped for lunch and to rest a bit.

As we were chatting over what to eat, a couple from Sweden walked up to us and asked if we were heading for Pelion.

Their car had broken down and they were  looking for a way to reach Portaria.

We asked where that was and they told us that it was on mount Pelion.

They started talking about it with such excitement that we decided, … why not?

We were in no hurry, we could check it out and do a good deed at the same time.

We asked them to sit at our table.   It was amazing how we got chatting about different things despite their poor English.

I always say that communication has nothing or very little to do with language.

This was evidence of my belief.  We shared the same passion for travel and exploration.

They were staying at a hotel in Portaria – a few kilometers from Makrinitsa; that being their first option but not lucky enough to find accommodation at the time.

We walked back to the car which we had parked near the port.

There were so many quaint little taverns called ‘Tsipouradika’ – apparently Volos is known for these hangouts.

Cafes lined up one next to the other, packed with people enjoying the autumn sun.

What a relaxed people they seemed to be!

We took our new friends to Portaria and dropped them off at their hotel.

Pelion mountain was just a short drive up but it seemed like we had entered another world.

The beauty of nature kept getting more and more impressive as we drove up this amazing mountain.

We sat at a café in the square which had a massive plane tree in the middle. 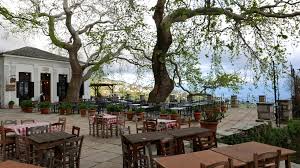 We had a small Greek coffee and a spoon sweet.

We asked what it was called and the lady said that she made all the spoon sweets they served there; this was called ‘firiki’ or ‘hrisomilo’ – a tiny oblong-shaped apple.It was absolutely delicious!!!  We bought a jar of that and also one of sour cherries. 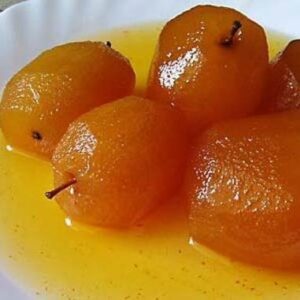 We decided to explore Pelion a bit more before heading on our way to Thessaloniki.

Makrinitsa was a must – especially after everything we heard from our new friends.

This was beyond our wildest imagination!!!

We had to park out of the village – cars were not allowed through.

We were happy to get some exercise so we didn’t mind exploring the village on foot.

The buildings had a unique architecture.

They literally hung from the cliffs!!! 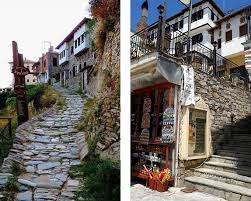 I was glad to be wearing sneakers as walking on the cobble-stoned road would have been challenging had I been wearing any kind of heel.

We came to a square with a huge tree again but this time there was a massive hollow in the trunk – you could stand up straight in it. 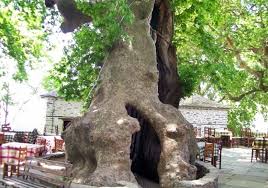 It was almost starting to get dark so we decided to sit somewhere for dinner.

We had the tastiest steak and salad with their local cheese called ‘galotiri’ – it is something like feta cheese in yoghurt.

We downed half a bottle of red wine and asked the lady serving us if she knew where we could spend the night.

She recommended a B&B place just a few meters away.  She said it wasn’t anything fancy but it was clean and hospitable. 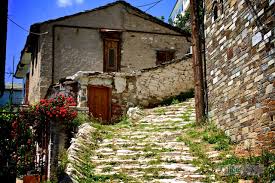 It was all we needed!

The next morning we headed north up the mountain to check out the ski-resort at the village of Chania.

There was no snow, being late summer, but we have put it on our bucket list for the following year; our next visit to Greece will have to be in winter.

We walked up to the shelter and looked as far as the eye could see – mountain peaks and fir-covered slopes … nothing else.

An eerie silence filled the air and the peace was almost deafening.

The shelter was closed; nobody visited it this time of the year but we took a peak inside through its large windows and saw the cosy interior. 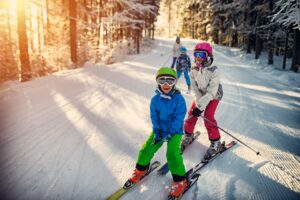 We could just imagine what it’s like in winter – bustling with life!

Skiers from all over the world visit Chania Ski Resort to enjoy its superb slopes and experience the magic of Pelion Mountain.

We made our way back to the main village and had lunch at ‘Kokkini’s Tavern’.

The owner makes his own wine of which we had a whole bottle; amazingly it had no effect on me – perhaps due to the altitude.

We sat at the fireplace which was lit despite it not being winter.

The temperature up the mountain was about 15 degrees lower than that of Volos at the foot.

We had a cup of coffee which the owner offered on the house, together with strained yogurt and a selection of spoon sweets to put on top.

As you walk through all the villages, you can hear the sound of water from the springs, the water from the melting snow at the peak …  the waterfall, birds singing melodiously, crickets doing their own thing …

A good idea is to close your eyes and focus on all the sounds of nature around you.

I found it most relaxing and rejuvenating.

We spent a good 3 days driving through the many picturesque villages – every few houses is a village of its own.

Tsangarada,Zagora, Milina, Horto, Agios Giannis are just the few that we managed to really take in. 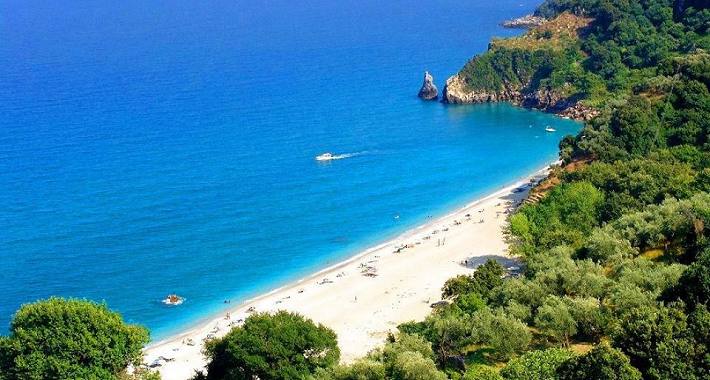 We stopped to admire Milopotamos beach which had crashing waves and was nothing like the calm sea of the Mediterranean that we know.

The people are amazing and most hospitable.

They are ready to offer information and they speak about their unique mountain with such pride – and justifiably so!

Pelion Mountain is indeed a most beautiful destination all year round.

For us, it was an unplanned treat …

We had started off with a different destination in mind and ended up in this beautiful place – thanks to our Swedish friends.

Our flight back to London Heathrow seemed so short as we thought of all we had seen and done while in Greece.

The friends we made, the food we tasted, the memorabilia collected and so much more …

(I’d like to thank Brad J. from Poole for his contribution to our blog.)

The Corinth Canal – just another amazing reason to visit Greece!!!