Who would imagine stealing … potatoes?

Yet, this is the story of how potatoes, this delicious vegetable became a staple of the Greek diet.

It was early in 1828 when the first Governor of Greece, John Kapodistrias ordered a massive shipment of potatoes to Greece.

Kapodistrias’ plan was to introduce potato farming to Greeks.

He believed this would be a great source of income for many and would subsequently be great for the economy of the country as a whole.

The boat, with the potatoes in its hold, finally arrived at the port of Nafplion – the country’s first capital in modern Greece. 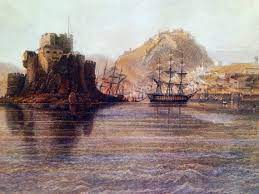 The locals received this shipment with indifference and completely snubbed the strange vegetable.

Kapodistrias had to think of a plan and really quickly too; those potatoes were going to rot in the ship’s holds if he just sat around hoping someone might find this new vegetable interesting enough to invest in.

He played on the peoples’ psychology!

He ordered the unloading of the potatoes onto the dock.

A massive heap of potatoes stood there, guarded twenty-four hours a day so that nobody would steal any.

The orders the guards had, were to turn a blind eye if and when someone would ‘steal’ a potato.

The locals were puzzled now.

Why on earth would anyone guard this shipment of the so-called potatoes?

They had to be worth a lot!

They would stand around at the docks and look at the potatoes thinking of sneaky ways of ‘stealing’ one or two, something which they did repeatedly until hardly any potatoes were left.

They soon realized how easy it was since the guards were ‘careless’.  They obviously never thought that they would pinch a potato or two … or more …

The locals saw how easy it was to cultivate this very tasty and nutritious vegetable.

It wasn’t long before potatoes were implemented into their diet and became a staple of Greek cuisine.

Even though this is considered to be a myth, some insist that this was indeed the way potatoes ‘invaded’ the country.

The first Governor of modern Greece, John Kapodistrias was not a successful politician and influencer without reason.

He was indeed a man with great ideas.

In fact, this didn’t please some leading figures of the early Greek society which inevitably resulted in his assassination.

However, the myth or true story of the potatoes gives many of us a reason to remember him and admire his amazingly advanced way of thinking.

Potatoes are served in a variety of ways and are enjoyed by everyone.