March in Greece and suddenly I notice everyone wearing this red and white cotton braided bracelet; men and women alike.

My colleagues at the office, the people on the bus, the cashier at the supermarket, the taxi driver, my hairdresser … everyone!

I could swear no-one was wearing it in February or before that.

So, what on earth is this all about?

I sat down for a cup of coffee at Kolonaki Square after I had done some shopping for my weekend break to the mountains which I had planned with my boyfriend; I needed to get some warm jumpers and a pair of hiking boots.

Suddenly, two high-school kids approach my table and guess what?

They were selling red and white cotton braided bracelets!!!

They, themselves had made them and were selling them to raise money for their school trip to Aegina.

I bought one but only after I had asked them to tell me what the story behind these mysterious cotton bracelets was.

It all dates back to ancient Greece and the Eleusinian Mysteries.  These were initiations which were held every year for the cult of Dimitra and Persephone and based at Eleusis in Ancient Greece.

There is evidence that this practice dates back to the Mycenaean period.

They represent the abduction of Persephone from Dimitra, her mother, by Hades, the king of the underworld.

It represents the phases: the loss, the search and finally the reunion of mother and daughter. 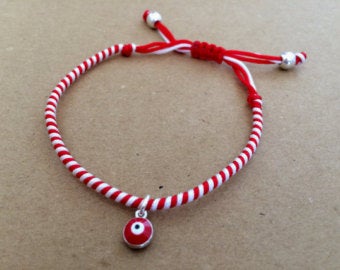 The cotton bracelet is worn on the wrist or even ankle from the 1st of March to the 31st.

They call it the “Marti” (March) and they say it is to protect them from the sun in the month of March which can be quite a scorcher.

Every March, this becomes something like a fashion accessory and while it all started off as a simple cotton braid, now you can find exquisitely woven red and white bracelets being sold in stores.

No matter how nice it looks on your wrist throughout March, it certainly looks out of place in April so you need to take it off and wear it again the following year.

Another tradition which has been handed down from generation to generation and has survived through the ages … all the way from Ancient Greece.

I have come to realize just how much mythology is respected and kept alive in this country.

So, have you got your “marti” yet?