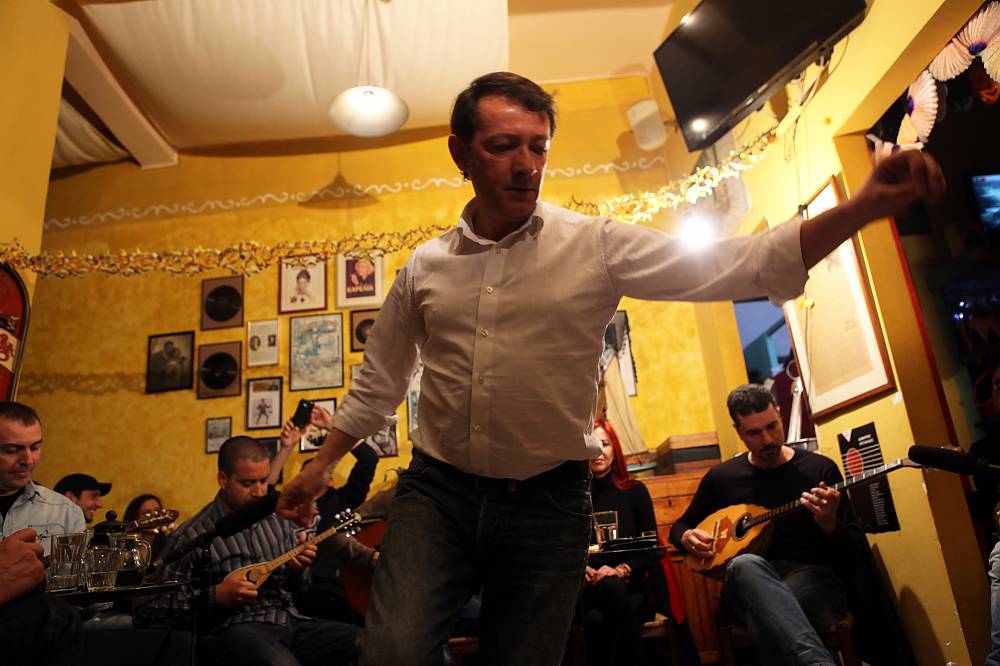 Zeimbekiko – a man’s solo dance in the past or otherwise … the drunkard’s dance.

What is this dance and where does it originate from?

Apparently, it originated in Asia Minor during the destruction of it in 1922 by the Ottoman Empire.

Many Christians were forced to flee the country in order to survive and their pain and hardship was expressed with this dance.

It is a blend of Greek urban folk and Byzantine music.

It is also connected to the Rembetiko – a revolutionary type of music and lyrics.

Songs expressing anarchist ideas and beliefs … many imprisoned revolutionaries sang these songs in their cells while strumming on their tiny baglama; a small musical instrument that looks like a bouzouki which they could easily hide in their blazer pockets.

The zeimbekiko was initially danced by a tribe from Asia Minor called Zeibekides; hence the name.

The Zeimbekiko dance, Rembetiko singing and the small Baglama, are all correlated with the Greek revolutionaries who were looked down on; usually people from the lower classes were connected to all these.

It is a dance which has no specific moves – the dancer is driven by the music – he looks as if he’s in a trance, completely oblivious of his surroundings.

There is pain and heartache all over his face as he moves in circles within a space not larger than two square meters.

Onlookers can sit around and clap to the rhythm but they are not to join him as he works off all his pain.

One particular zeimbekiko was the cause of an extreme outburst by Nikos Koemtzis who ended up slaying three under-cover policemen a few decades ago.

There is an unwritten law that when one gives a special request for a zeimbekiko, nobody other than the person requesting it, is allowed to dance it.

On that night, Nikos Koemtzis went to a popular nightclub called Neraida, together with his younger brother Dimos.

Well, three police officers who wanted to provoke Koemtzi, who was known to the authorities as a “troublemaker”, got up and began to dance next to Dimos.

Nikos, the elder brother had asked Dimos to dance for him; he adored his little brother and loved to watch him dance.

In a matter of minutes, the police and Dimos had turned the dance floor into a boxing ring.

Nikos saw his brother on the floor bleeding and he lost all control. He dashed onto the dance floor with his penknife at hand yelling, “Parangelia Re!!!” (It’s a special request you bums!!!)

He stabbed the three police officers and injured another eight people.

Koemtzis was sentenced to life imprisonment.

He was released after many years due to good conduct.

He died in central Athens next to a makeshift stall where he sold his biography “To makri zeimbekiko” (the long zeimbekiko) which he had put together whilst behind bars.

The zeimbekiko has since been related to the ‘manga’ (the macho guy), and is the dance which is indeed better danced by men and if I may add, slightly intoxicated – it just makes the moves more seem more natural.

This story had inspired the making of a film called … “Paraggelia …” what else?

It came out in 1980, seven years after the incident at “Neraida” night club.